We are currently experiencing an unplanned outage for this product. View Service Status

What is being released in Rescue 7.50 and how is it different from what customers have today?

A new version of the Technician Console (version 7.50) will allow Windows users to connect to a session via a new WebRTC based tech stack and next generation (next gen) media service.

This tech console version will also contain the following improvements and fixes:

A new version of the applet for Windows and Mac will also be released (customers do not need to do anything – these are automatically downloaded as part of session initiation).

Once users update to the latest Technician Console, they will have a vastly improved agent experience when next gen media is enabled, including:

When is Rescue 7.50 being released?

Will Rescue 7.50 be released to all customers?

Yes. Any customer will be able to download the new Technician Console; this will NOT be a forced update.

Are customers required to update their TC to 7.50?

No. This is an optional update. If there are customers interested or experiencing latency and lag, they can move over to Rescue 7.50. Use of this new TC is optional during the initial release.

Will we ever force customers to update their TC to 7.50?

No. Any TC updates are never truly “forced”. Once Rescue 7.50 is moved to the live version in 2022, customers will begin to see the update prompts – however they always have the option to decline.

Will this release impact both Windows and Mac users?

Use of this new Technician Console is an option available to Windows users only. Currently, over 90% of users are on Windows PCs so this should not have a huge impact on our customer base. We will provide more updates as the Mac Tech Console becomes available.

How are users being notified of this update is available?

Users will be notified in product via the My Account Page when Rescue 7.50 is generally available. Additionally, we will notify users via the Community page. A support article has also been created.

Customers can always stay up to date on everything that is released in Rescue through our Release Notes.

Are there any network requirements to update to 7.50?

No. There are no changes necessary to update the TC – however changes are necessary to use the next gen media (please see question below).

What changes are necessary for using next gen media?

Users will need to enable the following domains to use nextgen media:

What steps are necessary for a customer to update their TC?

Is there any detriment or loss of functionality if a customer decides not to update?

No. The product will continue to function normally.

If a customer moves to Rescue 7.50, can they then move back to an older version?

Yes. Customers can always fall back to a previous version of the Technician Console if they have the installer available or use the “previous” link from the website.

How can Support tell if an account has already been updated to 7.50?

You will need to look at the version of the technician console which will be 7.50. To take full advantage of the next gen media stream the applet and calling card will have been updated also. The Applet or Calling Card will start with Win Applet: v7.50.429.2428

How can a customer see what version of the TC they are on?

Version information can be found under Options > About LogMeIn Rescue. 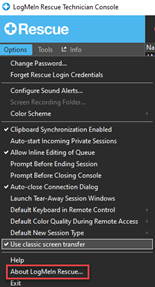 If a customer has updated their TC to the latest version, can they still opt out of connecting to the “next gen” media service?

Yes. The new TC will contain an option within the options menu “Use classic screen transfer”. When this option is checked, the TC will always use the classic connection mechanism and bypass the next gen media service for all sessions. 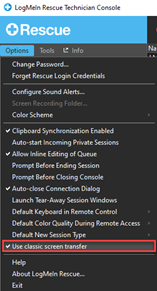 Can Admins restrict technicians from using the next gen media service?

Yes. Admins will see a new Tech Group permission Disallow media stream in Rescue sessions for technicians. When checked, the 7.50 Technician Console will only connect using the classic screen transfer.